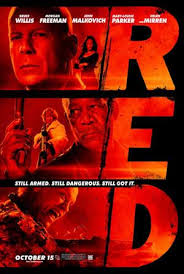 John Malkovich reportedly said somewhere he wanted to make an action movie for himself. I hope the idea of this excites you as much as it did me.

What Malkovich apparently wanted was pure adrenaline and fun, and Red has this in spades.

It’s a promising premise for a film – a bunch of retired secret agents join up for one last escapade – and it’s executed masterfully. The best comedy comes from Malkovich’s ultra-paranoid, twitchy and irrational character, but he’s perfectly complemented by the rest of his ‘old’ friends and the plot continues to generate and build on its own momentum and you find yourself genuinely emotionally engaged – when misfortune that seems insurmountable catches up with a certain character, you really, truly care!

Well, I did. The movie has heart, as well as brains, balls, bawdiness and funnies (I couldn’t be bothered thesaurusing till I found a humour-related b-word) and there’s never a boring moment.

It’s got a killer cast – Helen Mirren is dynamite, and her hapless Russian love interest provides her with the ideal comic foil. I’ve never found a sixty-something year old lady hot before, but there’s a first time for everything.

Mary-Louise Parker does some beautiful rubberfaced comedy and manages not to annoy me even once even as a helplesss female character.

Bruce Willis is as tough and cool as always (I sure hope he plans on being cryogenically frozen, because I don’t think I can stand to live in a world without Bruce Willis making action movies).

John Malkovich is worryingly good at being an LSD-addled, compulsively murderous conspiracy theorist.

Morgan Freeman as good as ever, and, somewhat worryingly, is wonderfully convincing as an infirm 84-year-old.

Love the cameo-type role of underground records officer played by Ernest Borgnine, who really should be cast as Mr Toad in a Wind in the Willows adaptation without delay.

The movie has great action sequences with stylish fighting – but the fighting remains visceral and not TOO stylish (If you don’t know what I mean by too stylish, think Angelina Jolie-type-action). To illustrate, Bruce Willis channels John McCain in a memorable running exit from a speeding car, emerging upright and shooting in an impossible stunt – but at no point does the movie sell itself short by relying on clever tricks like this. They add to the sense of pace and style but are used judiciously enough not to detract from the film’s main strengths, namely, characterisation and humour.

I hate describing things as ‘romps’ but this, if any movie does, deserves the old cliche. There is a sense of pure enjoyment and energy about it that is charming, but it keeps its edge with the perfectly choreographed action and acting clout that its veteran cast brings to the table.