A song that stretches time and makes the sea smell like bubblegum. 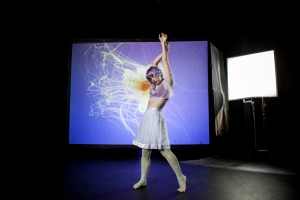 A lithe girl dances in her underwear.

That’s all you need to know.

But Grace and her hypnotic musing are enough to charm you from the start.

She has an evil mother, almost witch-like, complete with pointed features and the loving scariness only a mum can pull off.

It was so nice, after a few highbrow shows, to see intimate community theatre, and for a moment I could kid myself into thinking (somewhat like arthouse theatre itself does, probably) that I don’t need to explain any more than that.

That was unfair; in fact, one doesn’t end up with a furrowed brow after this neat one-hour production from the Blue Room, which I haven’t set foot in for years.

What’s not to love about a place where you can get $15 review night tickets, that gives you a beer and toastie for $10, lets you take said beer into the theatre, whose affable bartender gives you a deftly executed card trick, compliments you by checking your ID even though you are nearly 28, and then smells most enticingly of sage on the way in? The theatre, that is, not the bartender.

And all that before the play starts. I was looking forward to this, even though I worked out shortly beforehand there wouldn’t be any actual mermaids in this dark contemporary retelling of the fairy tale.

Now try and dance… only one elbow, or you’ll look like a prostitute.

I was expecting the beauty, but not the humour this turned out to have. My companions and I were a bit disappointed by hearing it was going to be a Serious Contemporary Retelling, but not dissuaded – the lure of the Mermaid was strong, and well enough referenced, both in the dialogue and through the use of music and sound effects on a beautifully simple set.

I was craning my neck enough to see what happens, and that shows a story intriguing enough to carry its audience, but not as frustratingly elusive as these productions sometimes can be. There was just enough mystery to provide a bit of conversation fodder after the lights went on.

Mother Nina (Georgia King) was perfect and Grace (Jacinta Lacrombe) stirred the heart. If she had been a less bewitching dancer the show would have been tedious, but she was enchanting and believably teenage. The mother-daughter dynamic, though played by actresses not far apart in age, was unmistakable.

This was an enjoyable and good-value show, with plenty of whimsy and sex appeal, but nothing too noggin-scratching. Could even have taken the Ministry and not felt too guilty, but precisely the thing for a night out with the girls.

The Little Mermaid plays until September 7 at The Blue Room Theatre. Tickets: http://blueroom.org.au/