As a die-hard Sleeping Beauty fan – it’s my favourite Disney movie – and a firm believer that it is the scariest Disney classic, needless to say I’ve been excited about Maleficent. Also a little nervous and possessive. 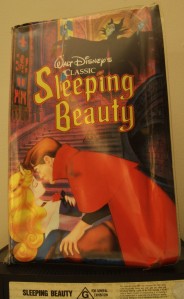 Proof of the old-school-ness of my love.

So I’m a little confused by my ambivalence after watching Maleficent, a tales that imagines another side of the story told about this truly nasty villain.

It’s one of the odder emotional arcs I’ve been through, watching a movie I’ve had a lot riding on –suspicious about how pretty it all seemed starting out, excited as Maleficent dropped her curse and got her evil on, then madly disappointed with how things went after that. Half an hour in I was sure I hated it. I thought, this is doing Wicked, but a pretty crap job of it, without any of Wicked’s subtlety or charm.

Then I worked out where they were heading with the storyline, and grudgingly managed to give it another chance.

It had some jarring bits of humour – cute, endearing, but nevertheless out of place with the gravity I craved. It had some clunky scripting, especially around the all-important curse scene.

There was some poor characterisation. King Stefan was laughable (Sharlto Copley, not given much to work with). The fairies were weird and  cringeworthy, though I did like the choice of Umbridge – Imelda Staunton will forever be Umbridge to me – as Merryweather, or Knotgrass, as they pointlessly changed it to. Aurora (Elle Fanning) was so insipid the Ministry and I wanted to slap her every time she gave that gormless smile.

Apart from all that, the look was down pat. The scenery was spectacular. And Angelina Jolie as Maleficent is jaw-dropping. Mesmerising, really, you just want to drink her in. She’s utterly believable and true to the original in every moment, while adding her own humanity to it, which is the whole point.  Plus, she looks great with horns.

This movie was all about the women, which was refreshing. It’s nice to have the handsome prince be the completely irrelevant, token character for a change.

Overall, I’m happy enough, if I try to forget about what they did with my beloved Flora, Fauna and Merryweather.

Special mention goes to Lana Del Ray for her beautiful, creepy rendition of Once Upon a Dream played in the credits. Now THIS had the gravity I craved.