‘I’d rather play Battleships but we haven’t any graph paper, have we?’
They hadn’t, and so they were forced to talk about the Space-Time Continuum, and whether or not you should write books which clearly fixed themselves into time or books which flouted the usual notion of time in order to clear the mind of arbitrary divisions. 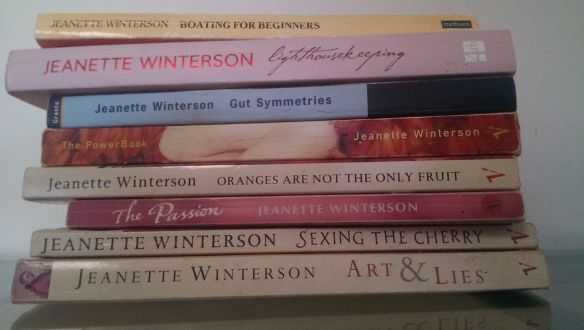 I revere many novelists, but it’s fair to say there are some for whom my feelings run deepest.

My affair with Winterson (and it seems entirely appropriate to describe reading her books as such) began during my English degree with The Passion. This novel was assigned for a unit on postmodern narratives, but don’t hold that against it.

I’ve actually only read a couple more of her works since then, but this was enough to make Winterson one of the authors to make the most lasting impressions on me.

Long after the details of The Passion‘s alluring stories of labyrinthine Venice have faded, I remember how arrestingly its language and characters hit me, the pull of its mystery.

Winterson’s writing is sensual, thematically complex and unexpected. Her power of invention is so dazzling it seems inadequate to term it imagination or originality. Her creativity is not about novelty, charming though her novelties are; it is about what they ultimately serve to reveal, the truths about how people think and what they desire.

At least, that’s how I remember it. Is it any wonder I haven’t picked up one for so long? After uni, I craved meat and potatoes reading for several years, hence my impressive mental crime novel catalogue. And sometimes you just get out of the habit of wanting to be really moved, really unsettled. You just think… I’ve had a long day at work. I need some simple entertainment.

This sort of thinking has resulted in me hoarding several unread Wintersons for more than several years, so I thought it time to see if we still clicked, or whether my love was one best left in the past.

So I open the book and the storm hits.

Boating for Beginners, which I shamelessly chose because it was short, features a romance author called Bunny Mix, a God made of animated ice-cream and Noah, who created that God in a culinary accident.

They are pretending to make a blockbuster film, but they are actually planning to wreak havoc, destroy the world and rewrite history.

Unless, as synchronised swimmer-turned-transsexual potter Marlene says, a group of girls succeed in making “one heroic attempt at foiling that cosmic dessert and the little chocolate button that created him.”

‘I like reading books,’ insisted Marlene, ‘but I’m more concerned with how to get rid of the cellulite on my thighs. I mean, there’s plenty of books around but I’ve only got this one body.
‘Art shows us how to transcend the purely physical,’ said Gloria loftily.
‘Yes, but Art won’t get rid of my cellulite, will it?’
‘Art will show you how to put your cellulite in perspective,’ replied Gloria, wondering for a moment who was feeding her her lines.
‘I don’t want to put it in perspective,’ Marlene tried to be patient. ‘I want to get rid of it.”

Boating for Beginners turns out to be what the author herself described as a “comic book with pictures”, a laugh-out loud alternative to the Biblical flood myth, and a gimlet-eyed look at why people react to the story so powerfully.

I need not have feared it too smart to be fun. This story about people believing any story put to them, and creating their own histories, is wonderfully, confidently absurd.

I have decided to keep my pile of unread Wintersons and be less shy about dipping into it next time. Winterson is by no means a one-trick pony. She sparkles – and surprises – every time and deserves to be read now, not kept for another day.

We’re back on, in other words.

Keep or kill? In my new tradition (I am learning from this project) I am going to pass this on along with my other already-read Winterson titles. But I’m keeping those yet unread and I’m keeping The Passion.

4 thoughts on “The Curing of a Bibliomaniac part 23: Boating for Beginners (Jeanette Winterson, 1985)”