I actually wasn’t expecting to like this all that much. I just thought well, I like horror, and if it’s hung around this long surely it’s good.

I felt like I should have read it already and I also felt a vague curiosity to see what bits I know of the tale are the ‘original bits’ by Bram Stoker and what has been bolted on in various incarnations.

I can’t even remember seeing a proper retelling of anything purporting to be based upon the book. My strongest memory of any Dracula incarnation is the Leslie Nielsen 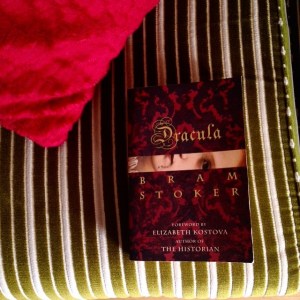 spoof, with a shudderingly gross Renley eating his flies and Dracula bumbling about a young lady’s bedroom, intoning “nowwwww I am innnnnn de closet”. The Ministry and I also recently watched John Malkovich’s Shadow of the Vampire about the making of Nosferatu, which I had high hopes for but regret to say we both found a crashing bore, uncultured swine that we are.

This book too I found deathly boring for about the first five pages (being of my generation I never have much patience for even the most rudimentary opening descriptive passages) then quite unsuspectingly I fell into it as if into a dark well. I was hopelessly captivated. I finished it in less than a week, quick by the standards of these days when, alas, more things than reading make demands upon me. I recognised more parts than I thought I would – not just the aforementioned Renley with his flies, but also a ship crash, and the poor woman whose bedroom Leslie Nielsen bumbles about in and the bad end she meets – but at the same time there was a huge amount that was completely new to me – all the coolest stuff basically. Even the story of Renley is a rich and mysterious story on its own, and full of pathos.

I’ll tell you why this book was so cool, though – it’s mostly in epistolary (letters) format, alternating letters and journal entries between and of main characters Jonathan Harker and fiancé Mina, her best friend Lucy and her betrothed Arthur Holmwood, Holmwood’s friends Selway and Morris, and finally the doctor and vampire expert Van Helsing, a character so truly lovely he makes the book’s most horrid scenes less grim and more beautiful. There are also newspaper articles on the various creepy events around town as Dracula infiltrates London.

Suffice to say that to represent the tale as just heaving bosoms and fly-eating is reductionist. And it’s this first-person changing perspective, as this edition’s foreword writer Elizabeth Kostova (author of Dracula-inspired The Historian) that really makes it so shivery. You have to watch the writers all put the frightening facts together at their own pace, and there’s plenty of head-clutching while you wait for them to all get together and figure things out before it is too late. By the end, the suspense is positively unbearable. It actually kept me up until past 9pm two nights in a row (I know!) It’s gothic, sexy, scary and graphic. Female readers must grit teeth through the horrifying sexism reflecting the time most accurately, but despite this all the characters are well-drawn. Their tale, and their worry over a friend whose soul hangs in the balance, brought me to the verge of tears several times.

I know when I have had a great read when I immediately seek out all associated movies. I haven’t the heart to go back to Leslie Nielsen now the full blood-and-guts version is ringing in my ears, so to speak, but I have had the Ministry dig out the Winona Ryder/Keanu Reeves version, and though I can barely even say those names in concert without smirking, IMDB has given it a good rating – so we’ll see. Gin martinis and Dracula for dinner tonight then, though perhaps red wine would be more appropriate.