Good news, everyone! Me and my buddy Hamish Hastie, WAtoday’s business reporter and all round excellent dude, won Best Multimedia Report for our investigation ‘Perth’s tangled web: Property, power and the people who pull the strings’ at the WA Media Awards this month. 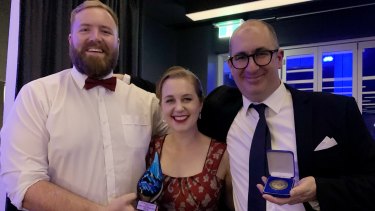 Hamish, me and and Nathan Hondros with our awards!

I view urban planning as intrinsically linked to both public health and environmental health.

So when Perth residents contact us so often in anger at the decisions of government planning boards, whose processes are often shrouded in secrecy, I view it as important.

In fact, our coverage was leading to so many fresh leads we decided to get to the bottom of that distrust.

We’ll just do a little investigation, we thought…. FOOLS!

Tangled Web ended up totalling 36 eight-hour days over three months, while juggling normal duties, systematically scouring hundreds of meeting minutes. Many long afternoons closeted in an airless boardroom with our laptops and a giant spreadsheet, with me going “we probably don’t need to look at ALL these minutes”, and Hamish saying, YES WE DO, COME ON.

We mastered a visualisation software that has never been used on this level by any news outlet in the country to create the “web” showing the relationships between developers and projects.

The judges said: “Emma Young and Hamish Hastie may have used old-fashioned journalism to assemble the nuts and bolts of their Tangled Web series, which painted a convoluted picture of the connections between those who control almost every facet of Perth’s property world, but there was nothing old fashioned about the presentation.

“They made use of impressive data visualisation maps to show just how connected the players are and accompany a compelling piece of journalism on a subject that affects so many West Australians.”

If you want to read it, links are at the bottom.

Secondly, a shout-out to my other colleague, mentor and friend Nathan Hondros who won the Arthur Lovekin Prize for Excellence in Journalism 2019 – one of this state’s three most prestigious journalism awards –  for his investigation ‘Sleepers Wake: Uncovering China’s WA War of Influence’.

He also revealed how Chinese information operatives could impact WA, the Australian state of most interest to China because of its mining and business opportunities, and because of the influence it exerts over Australia’s economy.

Increasingly, the interviews he did with security and intelligence agencies and foreign affairs specialists showed him their worry over the lack of scrutiny it was getting.

His increasing frustration with parliamentarian’s responses (you could see the steam coming out of his ears in the office) made him tackle this like a dog with a bone. He wrote piece after piece (I am talking well over 30 in a year).

He almost destroyed his government media relationships, but he struck a nerve and forced the government to sharpen its focus and start providing clearer answers.

Judges said at a time when no other WA journalist was tenacious enough to probe the state’s links to one of the world’s financial and political powerhouses, Hondros took the risk and was prepared to jeopardise his reputation to publish the stories worth telling.

They called it “a detailed and tenacious examination of a complex network of people and organisations, asking at times uncomfortable questions over the relationship between state, political and corporate interests, and the need for transparency in business and diplomacy”.

The issue has only heated up since, and that is in large part due to Nathan’s tenacious and fearless reporting.

Finally, while it remained a finalist and missed out on the Health/Medical prize, my colleague Daile Cross’ investigation of the treatment meted out to an autistic man with complex needs, by the Department of Communities which was supposed to be caring for him, was an incredible example of energetic, ethical and compassionate reporting that achieved a massive improvement in the quality of this man’s life by forcing action from a department that had been ignoring the concerns of his family.

Over the past decade, the old business models of media companies have collapsed and about 3000 journalism jobs lost in Australia.

Media ownership has concentrated, we do ever more with ever less, and these days many journalists are increasingly constrained in topics they are allowed to write about and the time they can take.

They get a bad rap from people who do not understand this, who simply think all journalists are dickheads and don’t care about their duty.

PART 1: Perth’s tangled web: Property, power and the people who pull the strings

Perth is growing, with apartments springing up everywhere. But in many ways – the planning approvals system, for one – it remains a very small town indeed.

Part 2: WA’s small property tank: Where ‘big fish bump into each other’

“[Perth] is a small enough tank that big fish bump into each other. Even if not your project, it’s your colleague’s or your industry partner’s.”

There are checks and balances in place to manage conflicts in Perth’s planning system. But the closer to the top it gets, the murkier the process becomes.

part 4: A sticky situation: Scarborough skyscrapers and the MRA’s secrets