This book is not meant for innocents of whatever age. 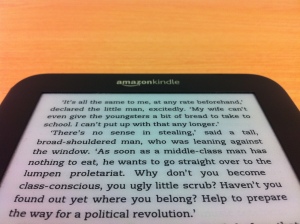 The author repeatedly draws attention to the anatomical differences between the sexes … causes ladies and other women to run around without any clothes on. He repeatedly draws attention to what is known rather off-puttingly as intercourse. Nor does he scruple to refer to abnormal sexual practices. He omits nothing which might lead the guardians of morality to express the view that the author is    a purveyor of filth.

To which the author replies: I am a moralist.

Erich Kastner’s book paints a picture of life in Berlin in 1931, the doomed Weimar Republic in a time of rapidly rising unemployment, after Wall Street crashed and before the Nazis took over.

It’s snort-out loud funny in parts and sexually adventurous, but has so many references to philosophical ideas, economics and class politics structure, by time I was 60 per cent through (apologies for Kindle terminology) it still felt like “homework” (to quote one book club member).

I felt as though I had skim-read until then the whole heartless affair, which felt a bit like reading Oscar Wilde in its disdainful descriptions of hapless characters Fabian bumped into, and in its confident one-liners about life, love and society.

Fabian didn’t care about anything, so I didn’t either, and I was just waiting until he was finished.

Normally, If I were reading a book that threw up all sorts of historically contextualised political and social issues as the backdrop to the story of a person, I would tear about making sure I had all the implications and facts straight before hazarding a review.

“For this, frankly, I can’t be bothered,” I drafted loftily.

“I will only say it’s about cultural identity, political ideology, unemployment and class structure in Germany between the wars and if you don’t already know about those things, this book is probably not the way to learn.”

“In its defence, it might be a lot more satisfying read for someone who does already have an understanding of these things and be a brilliant portrait of a society. You’ll have to ask someone more learned than I.”

Then Kastner then sneakily swept aside his cape and revealed several major plot twists, and suddenly, just like that, I cared. When I finished I had felt things, and felt I owed it a more considered review. I went back and read the introduction, which when I skimmed it previously was like chewing sawdust, but which now made sense and provided a much clearer frame for the story.

The poised and ironic voice of a liberal democracy tragically doomed to destruction.

He reminded me that Fabian’s detachment, which I found so alienating, is the whole point of satire ( not to mention the source of all those laughs).

He describes what I could only react to emotionally:

The triumph of short-term commercial thinking leads to an inhumanity that permeates the whole of society. It ranges from the casual callousness of the letter announcing Fabian’s dismissal, via the indignant censoriousness of the crown eager to condemn and punish a little girl who has stolen an ashtray , right down to the ‘Anonymous Cabaret’, where people come to laugh at performers who are evidently insane.

This inhumanity is why I found the book so hard to love. Even now, I certainly don’t love it; I just respect it. I resent it slightly for wrenching my feelings with an unexpected plot twist. I am not sure I will forgive it.

But I will reverse my earlier resolution that for people who want to learn about this particular time and place in Berlin in the 1930s, this is the wrong book. In fact, I think it’s probably just the right book.

Now if you’ll excuse me, I’m off to watch Cabaret, which I still think will be a lot more fun.

I need to read a book about Nazi Germany like I need a hole in the head: my thoughts when I hear the latest book club title.

But I warm to it immediately as it opens with a trio of quotes, including a much-loved Nick Cave lyric:

Outside my window, the world has gone to war / are you the one that I’ve been waiting for?

Toller and Ruth alternate to tell of their group of friends’ story in the years leading up to World War II, as to the world outside Germany.

When Hitler assumes power, Ruth is in the bath. Her husband is mixing a mojito with his new lime-squasher. But as Hitler’s deadly intentions towards those who do not share his beliefs become quickly clear, the group take refuge in London.

Toller speaks in his London hotel room in 1939, as war begins, and Ruth from where she is living out the end of her days in modern Sydney.

She and Toller reconstruct Dora, always driving action from the background – an anonymous correspondent, a translator, an information smuggler. Rarely is she the centre of attention.  Yet she is in the forefront always for Toller and Ruth.

It is the ones we love we remember most. We have grown to be who we are around them, as around a stake. And when the stake is gone?

I have never been a reader of non-fiction, but when I look back over this blog I see a newfound love of almost-true stories.

These tales have in common their gripping narratives, and this is no different; there is not a dull page.

There is the building sense of dread that comes with any account of Hitler’s misdeeds, so evil they are even now almost unbelievable – just as the British, harbouring the refugees, found them.

But it’s not this alone that compels. Ruth’s story is told at first in snatches, but becomes increasingly intense as she withdraws first to a hospital bed and then to her own mind, interrupted only by visits from doctors and her cleaner.

She pushes aside the curtain with a swoosh and there she is, a huffing, and puffing reminder of my other life, the outside one with biscuits and banter and sunshine walks.

Ruth succumbs to this. The story is more real now to her, twisting and racing.

They have added something to the drip. It is collapsing time. I see things I have imagined so many times they are fact to me. And other things I have known without seeing.

The problem with life is that you can only live it blindly, in one direction. Memory has its own ideas; it snatches elements of story from whenever, tries to put them together. It comes back at you from all angles, with all that you later knew, and gives you the news.

We were the two for whom she was the sun. We moved in her orbit and the force of her kept us going.

One point: I don’t like its title or its cover. As one book club member suggested, it seems much like something a publisher would recommend Funder call it to attract the ladies’ market. I can’t really see the relevance of the title.

But the wishy-washy title and cover belie the book’s deadly seriousness, finesse and the author’s remarkable analytic and storytelling skill.

It is not for the faint of heart, but to those who want a story to make their pulse pound and their heart ache: this will not disappoint.

And I was the only one masochistic enough to end up reading it.

It’s not that I don’t love haunting, moody, elegant writing with a touch of dry humour. I do, I swear I do and that’s why I loved The Great Gatsby.

Hell, we all loved The Great Gatsby — those of us with souls, anyway — but though this is unquestionably Fitzgerald’s excellent writing, with all the qualities listed above, there was something about Gatsby’s story that made it immortal, and that didn’t happen here.

I have the closing lines of The Great Gatsby written down in a notebook somewhere, and they still make me shiver a little inside, and I thought The Beautiful and the Damned was a sure bet.

I knew it wouldn’t be a barrel of laughs, but I thought like Gatsby it would have that lift, that loveliness that turns sadness into something beautiful.

I’m half disappointed just because the book sounds so cool. I mean, The Beautiful and the Damned is sexy as all get-out as far as titles go, and it definitely fits. I have never met characters quite so beautiful or quite so damned.

But try as I might to read something more into it, it really does seem to eulogise, as the back cover so nicely puts it, “the vortex of that decade-long jazz party which ended in the cold dawn of the Depression,” that the Fitzgeralds were a part of.

I’m willing to be proven wrong, if there are any nerds out there who can muster up a meaning out of all the stuff about how Beauty is only allowed to remain in that society for 15 years.

It’s just that it should have some redeeming awesomeness, and honestly, this book just made me feel like crap whenever I picked it up.

It wasn’t a boring or slow read. It was still a decent read. But I wouldn’t really recommend it… unless you’re a glutton for punishment, like me.