But to go back a month in time…

We left PEI and drove six hours through an ever-denser grey abyss of fog and cloud that swamped the Canadian horizon, a Twin Peaks-esque tableau as surreal as it was beautiful.

It was a long haul, though (“LANE!!!”) and we were ready to surrender to a bus driver after returning the Chevy to Bangor. Another fabulously kind local, Pat from Rent-a-Wreck, gave us a lift to the station. 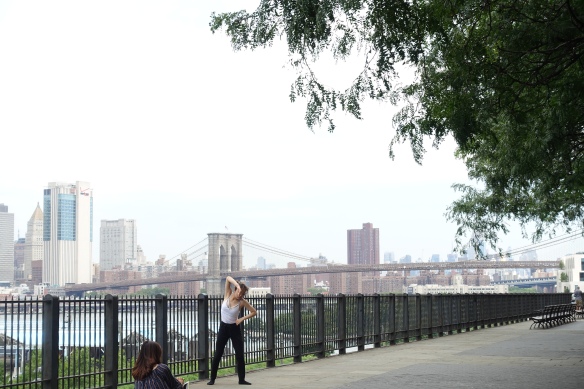 Hello NYC: a dancer makes the most of a stunning Brooklyn Bridge backdrop for her rehearsal.

The cloud continued through Augusta, Portland and Boston, then the rain began. But despite the weather the day seemed brighter in the USA. In fact it seemed to me, as I stared from my front-row seat through the windows, an oddly glorious greyness, tinged with gold. The sort of light that made you feel something grand and mysterious was imminent, the perfect light to herald our entry into NYC – a month I’ve waited my whole life for.

It was then I realised I’d been gazing through the bus driver’s special barrier window which was sepia-tinted and through the rest of the windows was a prosaic, sullen grey. Ha! No matter – nothing could dim the excitement inside.

We arrived ready to party and luckily NYC was more than happy to accommodate with a rooftop celebration on the Fourth of July.

It’s not literature that brought us to NYC, I’m sorry to say, but good old television. Friends, Seinfeld and Sex and the City have been our cultural bread and butter since hitting puberty, and before you open your mouth, Stu’s knowledge of SATC is even more comprehensive than mine.

Not to mention the movies – the classics, the crap and everything in between. All of it stamps in your memory the sights of Coney Island. Empire State Building. Central Park. Broadway. Fifth Avenue. Times Square. Greenwich Village. They’re not just emblematic of a country, a state or a city, though they are all this – they are also our neighbourhood, just around the mental corner. To people born and raised on the box, these places are larger than life and on shows like Seinfeld and SATC especially, they’re not settings so much as characters, as inseparable from the content as the actors.

As I have grown older I have become more aware of the odd paradox represented by the allure of a hyperreal land I have never visited. NYC is venerated as the centre of the universe, the common wisdom is that it’s mecca for anyone who wants to be at the top of their profession, be that arts, finance, or anything, or just live in the most exciting place on earth. After so many years of hungering for a Manhattan apartment of my own I had to ask myself, Carrie-style: is it real at all?

This is why we gave ourselves a month: to get the apartment (Brooklyn, though), pretend hard to be locals, and find out. 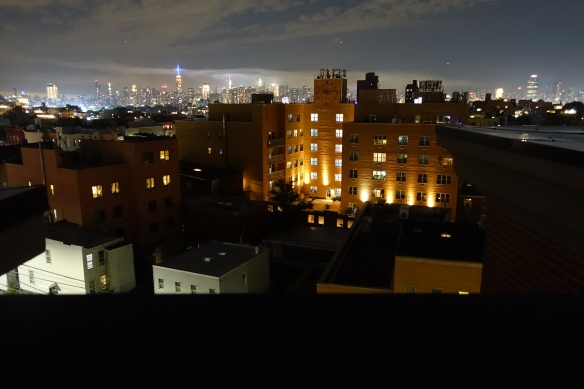 Thanks for the parties guys! How’s this for a spot to watch the fireworks?

We caught up with locals – my old friend Paul and his partner Stephanie, relatively recent Australian expats, treated us to penthouse parties on the Fourth of July; a newer friend Joe, from Brooklyn (Dom and Jess’ best man) took us out to dinner. They all tell me for the time being at least they would not live anywhere else, despite the expense, the long work hours, the high-impact lifestyle.

It’s easy to understand when every day you walk past icons – Liberty, the WTC, the Empire State Building, NBC, Radio City, the MET, the almost supernaturally beautiful Central Park, why New Yorkers would feel like they’re at the centre of the universe and love it.

Lady Liberty: up close, she is colossal, powerful and moving.

It is also easy to understand why it could make native New Yorkers somewhat insular, give the impression that they’re living in their own little world, that nowhere else is quite real. We observed this and ran it by our friends, and came to the conclusion: of course NYC-dwellers are living in their own little world. It’s complete, it’s self-sufficient. They don’t need to consider what it would be like anywhere else, because they have everything they need. Not to mention all the stuff they don’t need, evidenced by the confronting mountains of rubbish that are part and parcel of this life as much as the glamour.

But they all need to get out of the city from time to time, the natives I meet tell me. Whether it be to the Hamptons, upstate NYC or further, they build down time into their lives. 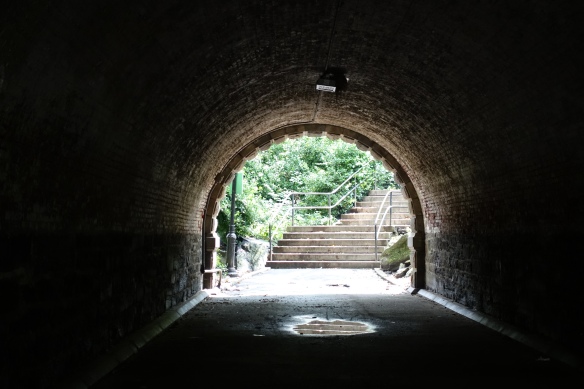 We did our best to do NYC justice in a month of touring combined with hard book editing –editing of my first novel is now complete and regardless of what happens now I am proud. I had the experience of finishing the macro edits in the New York Public Library’s Rose Reading Room, which I’ll never forget.

I’m also proud of how much we managed to do in a month. We walked as many of the neighbourhoods of Manhattan, Brooklyn and Queens as possible, ticked off the big tourist boxes and also did community stuff like farmers’ markets, local theatre, a doggy fashion show. We saw the stuffing out of Broadway. We devoted hours to art galleries and devoured food, glorious food. We quickly abandoned the mid-to-fancy range – there, Perth holds its own – so we concentrated on “only in New York”… bagels, pastrami, corned beef, babkas (yes! Found cinnamon babka!), pizza, international street foods, hot dogs, diner comfort food, cheesecakes, Seinfeld’s Soup Nazi. The only thing we failed to find was a good pretzel. It’s probably a good thing we leave, before I eat anything else. 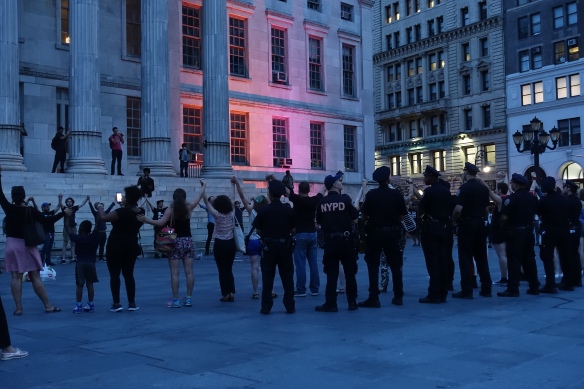 And I don’t know about Stu, but I’m excited about a return to nature. As stunning as Central Park and Prospect Park are, they’re not the nature I know, but a tamed, designed version, despite the “wild” zones – the Ramble in CP and the Ravine in PP. Nowhere do you escape the deafening drone of helicopters, the incessant scream of ambulances, the murmur of twenty million airconditioners running continuously to cool the throbbing heat of this city. It’s so exciting, so stimulating, and yet my heart longs for wildness, for real silence.

NYC is full of incredible beauty and also ugliness, each more intense than I’ve ever encountered. A land of extremes that prompts reflection, but gives you scant time for it. I might be sorry to leave if this were the end of the trip, and I have had mad urges to go and see two plays on the same day, just to fit more in, but we are only excited about the adventures still to come and perhaps finding that reflection time as we travel slowly through North and South Carolina, Georgia, Florida.

But first: two days each in Philadelphia and Washington, here we come! 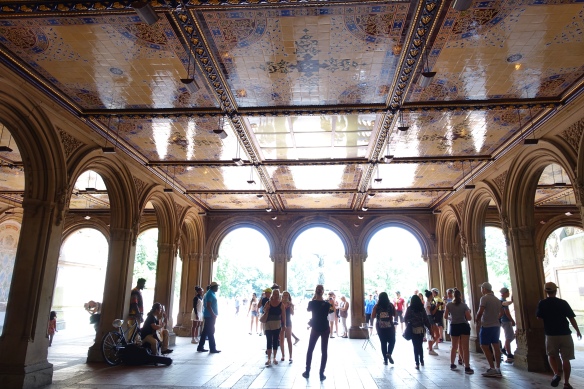 The memorial incredibly beautiful and sobering, the museum a raw and confronting exhibition. A must do. 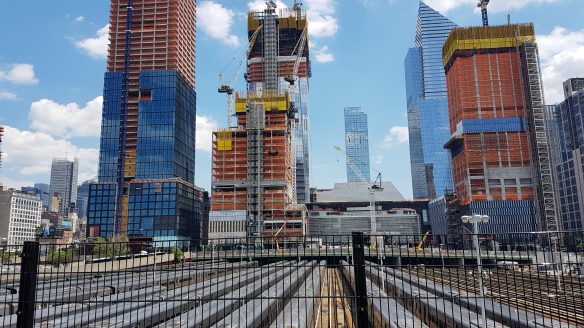 Week 4
Coney Island, lots of book editing, Kenka Japanese in East Village with Joe (the end of the mashup video below is Emma failing at the fairy floss machine there), Broadway Book of Mormon (excellent), Ess-a-Bagel, Jim Henson exhibition at Queens’ Museum of the Moving Image, Queens food tour consisting of slice pizza and shawarma, kayaking by the Brooklyn Bridge, Museum of Modern Art part II, epic East Village pub crawl with Paul and Stephanie, ate terrible pretzel off street cart when hungover, regretted this, Kramer’s Seinfeld Tour (yes, Kramer was based on Larry David’s actual neighbour, who cashed in and now does an amazing behind the scenes of Seinfeld tour); Broadway The Lion King, Prospect Park part III.
Last hurrah: back to Peppino’s Pizza for a third time, for what the staff there now know as the “drunk Australian special”.

Spiderman clocks off to call his folks on Coney Island, as grungy and weird a place as we hoped.

What we’re watching
Whatever Happened to Baby Jane? Excellent 1962 horror movie. Well worth it.
Game of Thrones (hurrah!)

Coney Island. Strange and wonderful. Don’t get the cheese and bacon covered chips.

Bride keeps her cool despite sweaty masses atop Brooklyn Bridge.

We spent a LOT of time on the subway system.

Clever local barista mocks Trump. Off with her head!

Sorry, we didn’t stay anywhere this fancy, but we did make sure we walked through it and gaped. This is the gentry around Prospect Park in Brooklyn.