Mr Norrell … stood on the lawn and stared up at stars he had never seen before. He did not feel as though he were inside a Pillar of Darkness in the middle of Yorkshire; he felt more as if the rest of the world had fallen away and he and Strange were left alone upon a solitary island or promontory. The idea distressed him a great deal less than one might have supposed. He had never much cared for the world and he bore its loss philosophically. 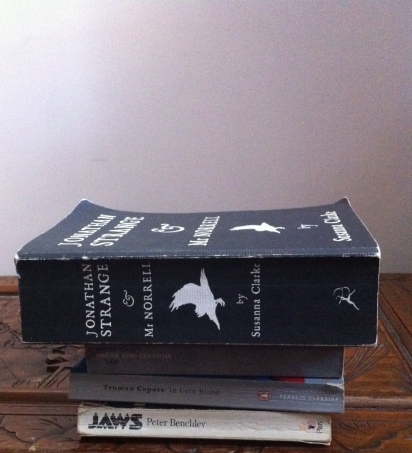 Since How to Cure a Bibliomaniac ended I’m not blogging every book I read, but after the sheer length of time I spent reading this I felt it only right that I should receive a medal, I mean give it an entry.

I should probably acknowledge though that it is not quite the world’s longest novel. My now finely honed collection (one set of shelves! Woo! And, er, one crateful standing in front of it) still contains one longer, Isobelle Carmody’s doorstop The Stone Key which lords it over Clarke’s 800-odd page tone with a whopping 1000 pages. Harry Potter and the Order of the Phoenix is also nearly 800, though a shade shorter than Clarke’s.

I know I’m harping on about how long this is, but frankly, there was a (now) amusing period in which I was convinced that no matter how many 15-minute blocs I dedicated, it grew gleefully a few pages longer each night while I slept and kept me stuck interminably at 200 pages in. I kept dropping it with a thud on my knees and saying tragically to the Ministry of an evening, “THIS BOOK IS SO BLOODY LONG.” Not helpful was the limited time I had to give, maybe 15-30 minutes each night, so it sure did take a while to read.

It is 1806. The heyday of English magic is widely regarded as over. Several hundred years has passed since the time England’s magician King and his numerous magician subjects who mingled matter-of-factly with regular folk. The door between Faerie and England once lay wide open and English roads tangled with fairy roads leading to weird and sometimes terrifying places. Now magic has become an area of historical and theoretical study rather than a practical profession and any man who calls himself magician is in fact a theologian.

Imagine the surprise and delight of this theological society and of society at large when they uncover in the Yorkshire countryside one man who is truly a real live magician, with a spectacular library of rare and long-forgotten magical books, who proves his talents in spectacular fashion then travels to London to lay his gifts at the feet of the government and generally be adored. This is Gilbert Norrell and quickly he is famous.

But Norrell is also mean-spirited and possessive. He wants to be the only magician in England and he certainly doesn’t want to share his priceless library. With the help of his servants he tricks and bullies anyone else who might like to give magic a go into giving it up before they have fairly started, outsmarting them into signing contracts saying that they will cease and desist, even convincing the government to outlaw the hocus-pocus-sellers on the street corners and run them out of town. He does all this despite the knowledge none of them pose any sort of real competition.

But the younger, more charming and far more adventurous Jonathan Strange slips through the net and disarms him. Against all odds he becomes Norrell’s pupil. Together they serve the government in matters at home and abroad – Strange travels with the army in the Napoleonic wars for several years, moving the countryside about to confuse the enemy, creating illusions to frighten the other soldiers. They prove themselves indispensable to the government and the people. Norrell even lets Strange read one or two of his books and they get on all right for a while.

But Strange is a strong and opinionated pupil, wanting to throw wide open the doors between the ancient magical world and the modern one and summon all kinds of magic and magical creatures – not just the ones sanctioned by Norrell. Master and pupil, once friends and colleagues, become bitter enemies.

But when Norrell is tempted into an act of magic, an impressive but foolish and ignorant feat in an attempt to stop death snatching away love, he unleashes an evil that will have consequences for him, for Strange – for the whole of England and beyond.

You think I have gone on too long like a modern movie trailer and told you the whole story, so there’s no point shelling out $20 to go to the cinema. But in fact I have just outlined the introductory premise. You’re only a few hundred pages in. Ha! No spoilers here.

This is a thoroughly English book and I mean that in a most complimentary way. It is almost Dickensian, full of detail and a definite comedy of manners. It is, as I have mentioned, also set in the 1800s, featuring cameos from Lord Byron, Napoleon and Wellington, with much chronicling of earlier centuries through extensive footnoting.

Despite knowing it is fiction, my hatred of pre-1900s history discovered in high school and strengthened in university extends into historical fiction. So I find it a hard slog to read what feels like a history, no matter how convincingly and deliberately this format is used, when I have been banking on straight fantasy. I have to force myself to read the footnotes despite an abominable temptation to skip them and in some cases my reading of them is shamefully close to skimming. But I read them all and so should you. You’ll need them.

To be brutally honest, and I concede this could be the hater in me talking, I think this novel need not go quite so far into the Napoleonic wars as involving Jonathan Strange. It feels somewhat like a sidebar, one that just goes for too long. You could probably cut out a good 200 pages and make them a spin-off novel, which makes me sound terribly Grinchy. In fairness, perhaps someone who likes historical fiction and has more than 15 minutes a night up their sleeve will probably lap it up. Perhaps the book is to be applauded for keeping someone like me involved enough to keep going in the first place.

But wait! What light through yonder window breaks? About halfway through, on a rainy weekend day I am able to settle in for a few hours, I begin to appreciate the fullness of the portraits of Norrell and Strange, and the depth of the tale, so tightly packed with asides and footnotes and backgrounders, now slowly unfurling, its darkness gathering.

And it bewitches me. The central trunk supporting its many branches, many leaves, is a story of love and risk, of an otherworldly danger that lies in wait for people to stumble into its trap – and pay the ultimate price. As widely as the net is cast across the real world and the magical one always just beneath, it is this central story, this central danger that finally gives it urgency, a sense of what is at stake.

Quite after I have stopped expecting it, compulsion floods in. At last I feel that glorious feeling, the one I live for, of being glued to a lovely fat novel.

This is a truly outstanding book, the more so because it is Clarke’s first – according to Wikipedia she took 10 years to write it and this surprises me not a whit. It nearly took me 10 to read it. (only kidding, I’ll stop).

Approaching the end I am savouring each page, gleefully anticipating each twist, acknowledging that every little note sounded, every scene drawn has had its place as this violent and utterly fantastic adventure hurtles to its conclusion.

“Closing Jonathan Strange & Mr Norrell after 800 pages, my only regret was that it wasn’t twice the length,” Neil Gaiman wrote in his review.

A bit masochistic of him, perhaps, but I think we all get the point now. Go read it.

Postscript: oooooh. Have just seen this has been made THIS year into a BBC miniseries with an IMDB rating of 8.4. I knew I was right to read this book 11 years after its publication…