It took writer and political analyst Sisonke Msimang about five years to really stop and breathe after she moved to Perth from South Africa.

The author of Always Another Country and The Resurrection of Winnie Mandela said Perth, despite being a big city in size and infrastructure, had somehow retained a small-city feel compared to the wild-eyed hustle of Johannesburg.

People seemed strangely friendly and asked a lot of questions. It was a bit confusing, until she finally twigged.

Sisonke Msimang has held fellowships at Yale University, the Aspen Institute and the University of the Witwatersrand in Johannesburg, and has contributed to publications such as The Guardian, New York Times and Al Jazeera. She now lives in Perth, where she is head of oral storytelling at the Centre for Stories. Picture by Jessica Wyld

Her idea was simple but radical: slow it down. Sessions lasting an hour instead of 45 minutes. Breaks lasting 30 minutes instead of 15. Panels featuring two or three writers instead of 4-5.

The idea is that each session will allow for a deeper conversation, and maybe even questions at the end won’t have to be dropped as they so often are.

Each break will accommodate not a hasty bathroom trip but also give you a chance to grab a coffee or chat to the person next to you about what you saw or are about to see.

Small panels will allow members to have their say, address questions and go down enticing rabbit holes.

The flipside, of course, of any “less is more” approach is that sacrifices are made. The event cannot be spread over more days due to financial constraints, so the overall number of writers appearing is reduced.

But the list of headliners would seem to prove a limitation can also be a strength, with Thursday night’s launch revealing a list stacked with impressive international, national and local names.

One can hardly find a bigger headliner than Neil Gaiman, whose works include The Sandman comics and novels Coraline, American Gods (televised by Netflix) and Good Omens (co-authored by Sir Terry Pratchett and televised by Amazon Prime), who will be telling his life stories at Perth Concert Hall.

Bruce Pascoe, whose 2014 book Dark Emu was bought by more than 115,000 Australians in 2019 alone, and is now being adapted by ABC TV, is appearing in an opening event that sold out faster than any other in the wider Perth Festival.

At the launch. By Jessica Wyld

Each was handpicked for how their works speak to the festival’s theme of Land, Money, Power, Sex, and paired carefully with others for events that promise to push the boundaries in exploring those themes, with the result that many remarked to Msimang it was their most personalised, thoughtful festival invitation in years.

Look out for the companion story coming soon, detailing the must-see highlights of this year’s program, but don’t forget: slow down, and take it easy. 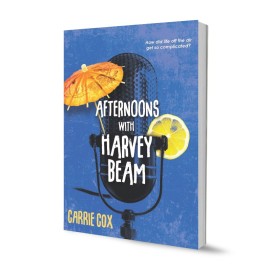 As a young man, Harvey Beam got the hell out of his hometown, confirming his suspicions that you can successfully run away from your problems. But after forging a big-city career in talkback radio, Harvey is now experiencing a ‘positional hiatus’. The words aren’t coming out right, Harvey’s mojo is fading and a celebrity host is eyeing his timeslot.

Back in Shorton, Harvey’s father Lionel appears at long last to be dying. It seems it’s finally time for Harvey Beam to head home and face a different kind of music.

In wading through a past that seems disturbingly unchanged, the last thing he expects is a chance encounter with a wonderful stranger…

Perth journalist Carrie Cox is the author of Coal, Crisis, Challenge and You Take the High Road and I’ll Take the Bus. This is her debut novel but it reads as though she has been writing fiction for years.

The premise sounds rich with the promise of drama and the narrative didn’t disappoint, unfolding in a way that kept me guessing right up until a neat tail-twist I never saw coming.

Cox has a gift for evoking places and people with deft, apt descriptions that are never laboured or overdone.

Her characters are filled-out, humanly flawed and likeable.

She gracefully manages the balancing act of focusing on and building the internal life of Harvey Beam, while spinning you through the story.

She invites you to understand the joy and madness, the peculiar intimacy and alchemy of the talkback radio world.

She has unerring insight into people and families, but still respects the mysteries at their centres.

Her creation of an eye-rolling teenager in Harvey’s daughter Cate is spot-on. It’s no caricature, however, but a sympathetic and sweet portrait of a girl who becomes an unexpected sidekick for Harvey in his family drama.

The topics are deep but Cox’s touch is light; all the while she is unfailingly, confidently funny.

She has nailed it and I can’t wait for the next book.

*Afternoons with Harvey Beam is at bookshops now. I got mine from Boffins.

While the development is planned for both Carters and Skipper’s, the environmental study was done on Skippers, a bare patch of earth.

Approvals for a controversial development at an ecologically significant site in Bayswater were based on incomplete environmental assessments, documents have revealed.

A towering Mt Lawley tree described by the local heritage society as a ‘church steeple’ in the landscape has got the chop, as its trunk grew slightly over the council boundary and on to a private development site.