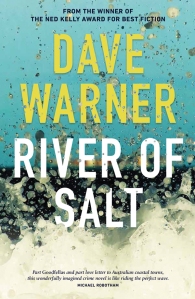 ‘I’ve made some enquiries on your behalf. Shaloub’s bodyguard is a giant, name of Granite. Granite’s no professor but he remembers absolutely every piece of tail set foot in the Cross.’

You might already know Dave Warner’s name. He’s an Australian musician who’s authored three previous crime novels, one of which won the Ned Kelly Award.
He was recently in Perth to promote his latest book, River of Salt, and I picked up a copy to see what all the fuss was about – I hadn’t actually heard of Dave Warner myself, but I do love Australian fiction and crime fiction, and I was intrigued by the jacket quote from prolific thriller writer Michael Robotham: ‘Part Goodfellas and part love letter to Australian coastal towns, this wonderfully imagined crime novel is like riding the perfect wave.’
It’s 1961 and Blake Saunders, a former Mob hitman from Philadelphia, has escaped that life to start again in a sleepy town on Australia’s east coast. He owns his own bar, the Surf Shack, plays in a band and surfs compulsively, slowly washing clean the sins of his past. But he can never quite lose the feeling there’s a target on his back.
So when a prostitute is brutally murdered in a nearby motel and a piece of evidence at the scene points towards the Surf Shack, Blake feels compelled to act, to clear the wolf from his door once and for all by solving the murder the police seem eager just to tick a box on.
I’m attracted to the writing early – it’s strong and clean and loaded with evocative similes. Like,

skies grey as an elephant’s belly.

The wind probed their clothes like the fingers of a dead man.

His belly pressed flat into the board, which gently rose and fell like a crumb on the chest of a snoozing giant.

He moved quietly as cancer.

If similes don’t excite you as much as they do me you’re a fool, but I’ll tell you more anyway.
Warner spends the early part not launching straight into the mystery, but sketching out a compelling cast of characters who hook you just as well as a bloodied corpse opener would:
Blake, a brooding heartthrob with a dark past and a killer’s instincts, full of guilt and regret. His yardboy Andy, a simple sap who loves the fish in The Surf Shack’s giant tank, and knows them all by name. Bar manager Doreen, beautiful and capable, but nursing a deep loneliness. Crane the beach bum, an alcoholic and a poet. Kitty the innocent, but smart and gutsy teen who wants so much more than what her hometown can offer.
The scene shift from Philly to Australia makes for an attention-grabbing contrast, and the menace and darkness of the Mob bleeds into the new setting quite perfectly. I had wondered how convincing it was going to be, the American fish out of water, but the details laced through are perfect, consistent and never overdone.
And 100 pages in, this simmering mystery comes to a rolling boil, with twist after twist keeping me wildly speculating, heightened in drama by Blake’s personal drive for a solution – and for absolution.
Blake is bound to appeal to readers: the man with dark stains on his conscience, but a moral imperative to act, and a strong sense of justice. Like Jack Reacher, but with a humanising longing for love and redemption.

Perhaps he should have let it go, left it to Harvey to get it right. But he couldn’t … He did not deserve any of this: playing his guitar in his own bar with a beautiful woman like Doreen working alongside him, surfing in the crystal ocean, watching the sun rise like a gold coin over a sheet of pure silver. He’d suspected all along it hadn’t just been gifted to him, that there must be more to it, some fine print like on a winning lottery ticket. This was the fine print. You have to help those who can’t help themselves, you have to protect and serve those who serve you.

Warner has strongly evoked a time and a place; but he has also riffed on honesty, human connection, guilt and love – and how the past will never, really, quite let you go.