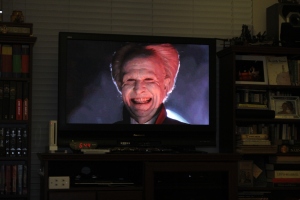 I found it somewhat perplexing that Dracula’s character was fleshed out (ha!) at the expense of every other character. It made the movie completely unrelatable.

Worth your time, that is, though it definitely would have been cinematically mindblowing when released in 1992 (or so the Ministry assures me).

It shamelessly invents an entirely new storyline of how Mina Harker (Winona Ryder) is actually somehow a new incarnation, or doppelganger, of Dracula’s (Gary Oldman’s) long-lost wife from five centuries beforehand. Upon seeing each other again in eighteenth-century London they are transfixed by one another again, with Mina living a double life – one as the prim wife of solicitor Jonathan Harker (Keanu Reeves) while secretly totally in love with Dracula and having sexy little meetings with him in which his teeth hover tantalisingly close to her creamy throat.

In the book, Mina is bitten against her will and horrified by the marks left upon her, and bound by a new ferocity to help her husband and his friends destroy the vampire and restore her to her original health and purity.

It’s not that Ryder isn’t good at acting sex-crazed and heaving her bosom and quivering with mouth agape. She is admirable at all these things.

But in order to tell this extra storyline, transforming Mina as it admittedly creates new depth in Dracula, the movie ignores precisely the things I believed made the novel compelling.

Like the excellently drawn characters, including a Renley drawn with detail and pathos, who work together to assemble clues, solve the mystery of Dracula’s evil intents and hatch a desperate plan to thwart him and free Mina.

Including a Dr Van Helsing, sweet and funny, willing to sacrifice all for the friends he is devoted to and views as his children. Despite being played by Anthony Hopkins, a skilled actor, he becomes in this version a leering old nutjob. 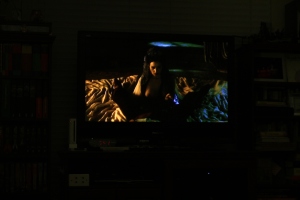 Suggested drinking game is to drink whenever you see gratuitous boob.

Or Lucy and Mina, originally female characters that managed to be well-rounded and strong and exhibit meaningful friendship and relationships despite the sexism inherent within their context. While they did act as ‘bait’ as a plot device, they also influenced events around them in other, more meaningful ways, and Mina’s personal attributes and skills drove the narrative. Lucy had fine emotional sensitivity, loss of which made her ridiculous character in this film even harder to stomach.

All this nuance was swept away as they ran about with breasts flopping (or alternately lay about with breasts thrust upward through filmy nightdresses). They seduced all without any sign of personal preference, lost in helpless lechery, completely without personal agency. Look, I’m all for a bit of sex appeal, but not at the expense of intelligence. 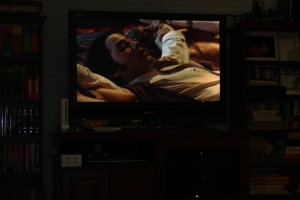 Poor old Keanu never gets a chance. To act, that is.

The plot mostly survives, skeletally, though I believe much of the tension of the final chase is removed as characterisation of Mina and Van Helsing now cannot do its work properly in ratcheting up suspense in the closing passages (replaced by a weird add-on in which Mina tries to seduce this fatherly old gent, which just would never happen in the original story). The love story between Mina and Jonathan, originally a fine and noble thing, is rendered wooden and completely unconvincing and for once it’s not Keanu’s fault.

Watch this movie for its 1990s visual tricks and special effects, so over-the-top in today’s context that they become a bit hilarious. Watch particularly for the obsession with florid cutaways and fade-outs that make much of eye imagery and other round things… I’m surprised there weren’t more nipples appearing in eyeballs, given the boob obsession. As a vampire movie and a popcorn flick and a product of its time and a portrait of Dracula, all excellent. But if you care about your education in the true classics of horror you owe it to yourself to read the book.

I vote someone should do a remake – twenty years on we’re just about due for something edgy, dark and restrained.