As a pubescent, I read Kotzwinkle’s E.T.: The Extra-Terrestrial, a novelisation of the legendary 1982 Steven Spielberg film and thought the book just about better than the movie. Don’t throw rocks at me. The book was excellent.

Hence when I came across an original Kotzwinkle several years ago I snapped it up and, true to form, didn’t read it. Until now. 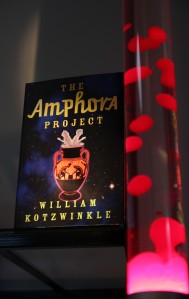 This is the story of Amphora, the immortality machine, and the humans who foolishly try to use it to achieve eternal life, at a time in which the Earth has long stopped being habitable, and people have long stopped accepting the idea of going quietly into that good night. When it becomes clear that Amphora is unstable and threatening the very existence of the race trying to use it, a band of fugitives makes one final attempt to destroy the device.

Lovers of a good robot, look no further – little Upquark, who converts himself into a suitcase in times of stress, is drawn haplessly into the battle and is hands-down what most endeared this story to me.

Upquark stared about in wonder. There was sand in his rollers, but excitement in his emotional card. Highly unusual circumstances were unfolding, for which he had no reference. He’d tossed and turned for hours in Ren’s ship, analysing for hours the terrible sequence of events he and his friends had undergone, and then, quite on its own, a train of nondeductive inference had begun, culminating in a picture of himself as a dangerous outlaw with a high metallic luster. Now he tried out a menacing gesture with his grippers, but no one seemed to notice. Perhaps he required Pugnacity Firmware.

Special mention, too, goes to the ‘junkernauts’, hazardous monoliths formed of obsolete, lunatic and half-broken robots determined to go on functioning in whatever capacity possible, with the result that they join to form these enormous oddities that sail about the galaxy, spectacularly destroying everything in their paths.

With its invention, whimsy and vivid stable of lovable, repulsive, weird and sexy characters, this would in fact itself have made a great movie. As a book it was a little hard to get, and stay, immersed in.

Though I put this down to lack of time to ‘get a run at it’, I find myself questioning this conventional wisdom. Surely the lack of ability to ‘get into’ books is not all because we all now have woefully short attention spans and even less free time.

When I feel truly captivated by a book I make the time, constantly rushing off for five minutes more to poke my nose into it, deciding to let this or that task slide so I might polish it off. Perhaps if we are so time-poor and have so much competing for our attention we should only keep reading any book if we feel that pull, and never let anything less suffice. (Though had this been my philosophy always there would doubtless be no chance I ever would have finished, for example, Mrs Dalloway  – a bit painful, sure, but undoubtedly worth it). But as a general rule…

I vaguely knew Kotzwinkle’s work, sure, so picking up the book was justified. But as you keep reading a book that is not compelling you, what else is going unread? Right now because of this project, I am not reading Peter Carey’s Amnesia. I’m not reading Annabel Crabb’s The Wife Drought or Don Watson’s The Bush or letting the Matriarch pass on her latest book club book, Karen Joy Fowler’s We are All Completely Beside Ourselves… or sharing the Ministry’s new obsession with Vince Flynn’s Mitch Rapp thrillers.

Did I enjoy The Amphora Project? Yes. Would I recommend it to a sci-fi lover? Yes. Was it worth feeling cut off from the new book world for? Not really. Welcome to my learning curve.

Slowly I am realising I don’t actually want to read every single one of the hundreds of unread books I own, though I feel like saying it quietly in case they hear me. It is not that they have no value. It is just that I am realising the value they have to me, and to who I am, lessened over the years I carted them around.

Now what I value is freshness and space, clarity and time. A load of books is not proof of personality or taste and nor should it be. If an object is in my home, I should get joy from touching it and seeing it, not a vague sense of guilt and overwhelm.

There are only so many rainy days I will have in my life.

This is why from now in on How to Cure a Bibliomaniac that for each letter I do as the second half of the alphabet approaches – if I pick one book above the rest, with the internet as my witness, I will get rid of the others if I’m not serious about reading them.

And I’m not going to keep this book either.

The book takes place over a single night after the death of serial killer Myra Hindley, partner of Ian Brady. Together, they committed the Moors Murders and earned themselves eternal hatred from all those who ever heard of them.

Thomson doesn’t name Myra Hindley; he doesn’t have to. The details that emerge make her identity clear.

It is the night before her funeral and Billy Tyler is a policeman charged with guarding her body overnight, as  mob violence threatens from the emotional public around the mortuary.

But not only the public is feeling irrational fear. Billy’s wife Sue also feels that the corpse must be malevolent in some way. She begs him not to take the job.

However, being a sensible and stolid English chap, Billy accepts the job and does it faithfully.

And as Hindley begins to make her presence felt, Billy’s thoughts and memories, worries, and guilt over past temptations unfurl alongside it.

The idea is rooted in fact but wholly a product of the imagination. I have a particular soft spot for novels that do this: take reality and then do whatever the hell they want with it.

Thomson never trivialises the atrocious story of the Moors Murders, but uses it to explore the emotional reactions that people attach to such horrific crimes as these against children. He examines the way we relate to these events within our minds. He questions the differences between human beings once pretence and defense is stripped away and uncertainty allowed in. Where is the line drawn between sane and insane – murderous or law-abiding?

The structure is one of stretched and distorted time. Thomson takes readers on a journey of heightened psychological awareness in a way that calls to mind something like Virginia Woolf’s Mrs Dalloway. Like Mrs Dalloway, it is the more powerful for its sense of limbo and existence outside ordinary time – and space, since the action in its entirety happens within one building and within Billy’s mind. This tightly controlled narrative drive swings between the present nothingness, Billy’s agony of waiting, the almost sensory-deprivation of the mortuary and Hindley’s locked cabinet, and the rich sensory world of the memory. These regular swings mark the passage of time throughout the night with with pendulum-like regularity.

Freedom is found in the words. Thomson ticks the poetry box by showing you pictures as memories and experiences, rather than telling you stories. For a book whose action basically consists of a man sitting in a room with a dead body, this is a compulsive read with a momentum all of its own.

Thomson’s restraint, and the sheer power of his imagination, are a formidable combination.  His atmosphere is intensified by the scarcity of outside characters, apart from brief appearances by a couple of others and Billy’s wife, artfully sketched, that serve to heighten rather than relieve the almost unbearable tension and sense of solitude. These characters are not shallow; they are only quickly glimpsed, but Thomson shines a penetrating light upon their hopes and fears as much as on Billy’s.

The characters complement the atmosphere that is built in the mortuary, a still, awfully silent place. In a passage that echoes this feeling of solitude and connects it to the past, Billy remembers visiting the place Hindley and Brady buried their victims, feeling there as he does in the present:

“a silence that was eerily alive, like the silence when you answer the phone and there’s someone on the other end not talking.”

The book is, as you can imagine, driven and buoyed by sheer description, and Thomson is master of the language he commands. To give you a taste, he describes the chapel at the mortuary where people come to pay their respects or identify their next-of-kin;

“In this room people’s worst fears would become a reality, and the air was petrified, stale, glassy with shock.”

Details and feelings are magnified through reference to the senses. Thomson transports readers through time by describing Billy’s experience of his memories; what he smelled, tasted, saw, felt. Each memory ties to his thoughts about Hindley; what she has done; what it takes to make someone commit acts of horror. At what point did she become this person? Was it in childhood? Billy remembers an incident in his childhood, beginning with the innocent rebellion of illicit drinking with an older, naughtier friend, and ending in confusion and violence.

He remembers every detail, even the vodka.

“It was warm and slightly oily, and he shivered as it went down”.

Was a shot of vodka ever before so ominous? Yet when we hear this, we remember. We know, and we become afraid.

Thomson repeatedly calls attention to these connections between the past and present, memories and actions, through the the significance he attaches to ordinary physical objects, like Fanta, crisps and Hindley’s almost-final resting place: a cabinet with a cold handle. The objects themselves are unimportant, but Thomson understands that the way they interact with our emotions and senses triggers thoughts and memories – many of them things you would rather stay buried.

Death of a Murderer is marked by this feeling of things lying in wait, just underneath the surface.

Billy remembers his struggle to understand the murders when they occurred, and falls into the memory of another expedition into a favourite haunt of Brady and Hindley. Just before he decides to leave, he imagines a child holding the hand of an adult, slowly disappearing from view.

“The streams had frozen over; black water squirmed through narrow channels beneath the ice … once again, he had the feeling that there was something to be discovered, but it was like having a word on the tip of your tongue and knowing that you would never remember it. There were things here that couldn’t be grasped or squared away – not by him, in any case.”

I won’t forget this book in a hurry. I would recommend it to anyone, even someone disgusted by the concept.

I was, in fact, haunted by this book; sorry to use the word; but a book you still think about a year after you finish it certainly qualifies.

What gives the story its power is the unease at its core: the unanswered question, the mystery at its centre: Why?