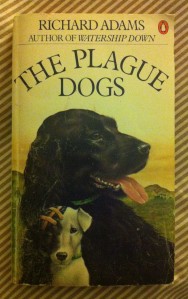 I originally picked this book up because it was by Richard Adams of Watership Down fame, though I haven’t read Watership Down. I got it out to read now because Adams was on my mind after I’d seen another book of his, Shardik, referenced in Stephen King’s The Dark Tower series.

I’ll save my rant about The Dark Tower for another time.

The Plague Dogs, with its simple blurb, looked intriguing.

Ahhh, you got me, I want to know more.

The novel begins with their break-out. Rowf is terrified of water after numerous experiments involving him being half-drowned in a tank, and Snitter is good-humoured and trusting, but suffers bouts of insanity after being subjected to experimental brain surgery.

As they turn to killing sheep for food, the situation gets out of control: life in the town is turned upside down, the facility they have come from begins to get unwelcome government scrutiny and the newspapers, smelling blood, inevitably get involved.

The world of men, politics and the media is depicted with droll, savagely sarcastic humour (the facility they escape from is acronym-ed ARSE), while the parts describing the dogs’ journey and struggle for survival are rendered in exquisite, lilting prose that frequently veers into actual poetry.

Leaves and branches flying by; helicopter in the sky. Airborne soldiers on the lea; plague dogs riding to the sea. Redwings, fieldfares, cows and sheep; should we cheer, d’you think, or weep? Plague dogs all the way from A.R.S.E., riding down to Ravenglass. What’s that car so black, sedate? That’s the Secretary of State, him as sealed the plague dogs’ fate. Wheel and piston, steam and tank, autumn oak-leaves in the bank, chuff chuff chuff and clank clank clank.

Snitter’s periodic drops into madness are particularly impressive – weird and clever. I wanted to read all of his dialogue out loud to the Ministry (though restrained myself).

I tired of the descriptive passages, though, in the same way I did when I was a kid and tackling books a little too old for me. This was undeniably good writing, but dated and the language is very old-fashioned and very English, making it a hard slog at times.

I was just starting to feel despair that I would never get through this deceptively slim book (a dense 460+ gossamer-thin pages filled with cramped type) when, entirely unexpectedly it ramped up for a suspenseful, compelling and emotional ending.

Thank goodness for that, too.

I wouldn’t recommend this book to anyone except those of a hardcore literary bent. A page-turner it is not. What I would do, however, is try to get hold of Shardik and Watership Down; I don’t doubt that these are his better known works for a reason.

Verdict: passing it on. To make space for one day owning Shardik and Watership Down one day (can you really ever cure a bibliomaniac…?)

More on my The Curing of a Bibliomaniac project here